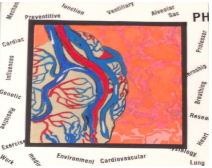 
I originally sent the email to Dr. Bruce D. Johnson who is a professor of medicine in a lab in Rochester, Minnesota. His department is cardiovascular disease, but works very closely with the heart and lung research center at the Mayo Clinic. I originally sent him an email asking if he could answer questions that I had for him on 10/30/13. He responded 5 days later on 11/4/13 saying that he or his research team would be more than willing to answer any of my questions. So I sent him the interview questions two days later and he still has not replied.


The reason I originally emailed Dr. Johnson was because he studied something that was connected to me in two ways. First was the obvious reason, that cardiovascular disease, specifically heart disease, runs in my family. The second reason was that I have very severe asthma and he studies Cardiovascular specifically about how cardiovascular influences breathing and how breathing levels and conditions can affect cardiovascular disease. He has a lot of interesting research that I found, but the paper and research that caught my attention most was his paper,  The resistive and elastic work of breathing during exercise in patients with chronic heart failure.  I found this particular piece of work very interesting. While reading the abstract of the paper, I found many key points of what he researched specifically. One of the things that I found was that people with heart failure (inability of the heart to pump enough blood to sustain normal bodily functions. - Dictionary.com) show many problems with ventilatory function and it uses more energy for the heart and lungs to work during exercise. This was huge for me because in my health plan, I wanted to keep my heart healthy by being active, but at the same time I was finding my breathing getting worse and I had to reach for my inhaler more often. The paper found many things but one of the most interesting key points to me was that people who had heart failure in the past showed higher levels of inspiratory elastic work of breathing. What that means is that the people with heart failure took more breaths in than the control subjects. This makes sense because the more frequently you breathe in the more your heart pumps. This is just like when people panic and start to hyperventilate. Their heart rate goes up dramatically and that is what happens with the patients with heart failure. They tend to take in more breaths when exercising causing their hearts to pump much faster and use more energy. It came to a conclusion that said the people with heart failure had more work when breathing caused by resistive breathing rather than elastic. Elastic means it goes back to the normal shape after it contracts and resistive does not. So when the people with heart failure breath it does not go back to the same shape after they breathe out. The reason why they have trouble breathing is because after they breathe out the shape is irregular. So this whole paper was based on how people with heart failure found it harder to breathe when exercising as opposed to people who did not have heart failure. In the piece I made, it has a painting of the alveolar sac. This is inside of the lung that helps the blood pump through and carry oxygen throughout the body. The reason I chose this, was because it correlated with the work being used to pump blood and oxygen throughout the body with people who had heart failure. This goes hand and hand and I feel like this represents both the breathing aspect and the blood pumping. I chose to focus on the breathing aspect more because I also have asthma and no heart conditions that I know of yet. So the breathing issue is bigger for me even though heart failure runs on my dad’s side of the family. I chose to do the background orange because orange reminds me of work and getting your heart rate up. It is a very energetic color and it makes me want to be very active.