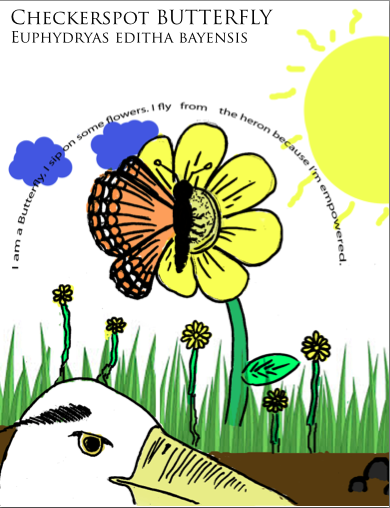 This project was pretty difficult mostly because I did most of the work. We originally had different words for the text, but it did not resonate well since this is a children's book and big words do not fit. So I re wrote the saying. The drawing was done by Reece, however I did all the coloring, photoshop and editing. I added the grass, colored the whole thing and added clouds and the sun.  Since my group mates left it all for me to do one day before, I had to rush to come up with this final draft which I was not happy with in the least.

This was the final draft of about six different drafts. The first five were not bad at all. In fact I liked them substantially more than the final. The only problem was that they were much too detailed for a kids book, and a majority of the detail would be lost when trying to scan it in. The plants you see in the background, which are an eye sore, were done on photoshop free hand.

I found out a day before it was due, so I rushed over to a computer and started to work on the final draft. The rest of my group was on the Crest to Coast hike, so I had no one to help me. I had to finish the art piece by the next day so I spent the rest of the day working, which was only about two hours. To do a whole art piece in two hours was pretty impressive, to me at least.

This project really taught me that I should never procrastinate.