When Jessica, Demos and I played Tenzie, it was a blast. The basic idea of the game is to get all 10 dice to display the same number, either 1, 2, 3, 4, etc. When you get all 10 dice to show the same number facing up, you win. You can chose to switch the targeted number value at any time in the game but will lose all of your previous progress. When I began playing, I thought it was just completely luck. I soon realized this was not entirely the case. Sure the probability for each dice to land on any number is 1/6, but some people realize they can spot certain numbers much quicker than others. I finally faced Carlee, the master of all games, and I noticed she saw snake eyes or dice with the 1 value facing up. This was very easy to pick out from the group of dice being rolled because it only had one, apparent dot. So I decided, if I saw that I rolled any initial die with the value of one facing up, I will try to get ten 1's. 2 and 4 were also a little difficult for me. For some reason 3's 5's and 1's are the best for me to spot. This is my strategy for the game having only played 5 games prior to this reflection. I also noticed that the smaller and shorter the rolls, the less time is used when trying to get all 10 dice to show the same number.

I never really enjoyed probability as a subject in math, so when I saw this game was probability I was not thrilled. But this game is about speed, how quickly you can make up your mind to decide on a number that you are trying to get tensie with. I really enjoyed this game and am excited to play with all of the handicaps it offers like close one eye while playing, or hop on one foot and obtain tensie. This game not only tests your knowledge of probability, but speed, decision making, and tactics used. There is no game that will rely just on luck, there is always a way to be good at a game. 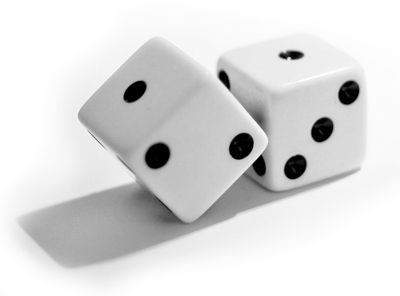